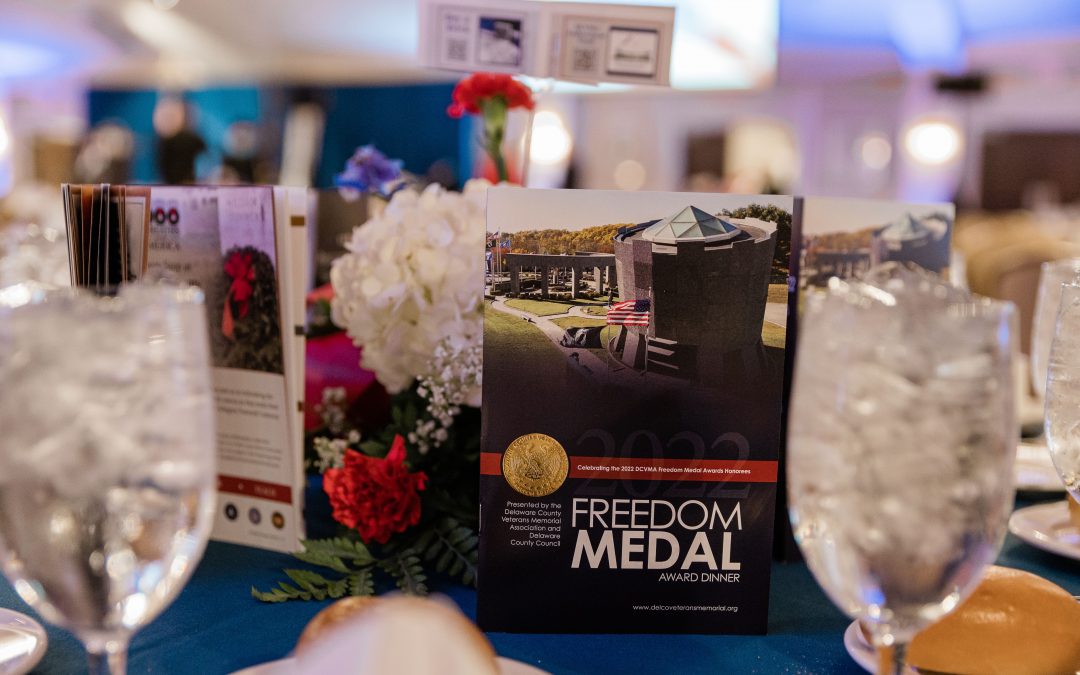 The event honored and awarded 2022 Freedom Medals to extraordinary local veterans and community members, recognizing them for their accomplishments, military service and dedication to our country, education, and service to the community.

The event drewover 550 attendees to support and pay tribute to outstanding veterans.

Guests enjoyed a cocktail hour and dinner, patriotic music, and an opportunity to watch the awarding of the Freedom Medals.

Short films describing the honorees’ exemplary service to their country and communities were played on jumbo TV screens above the ballroom, as a way to introduce the award recipients, before the medals were awarded individually. Afterward, each recipient gave brief remarks, often sounding emotional as they expressed their gratitude for the prestigious honor.

“The prominently positioned Delaware County Veterans Memorial on West Chester Pike in Newtown Square is both inspirational and all-inclusive in the representation of every conflict in which America has been a participant, fron the Revolutionary War to the conflicts in the Middle East,” stated veterans association board President Joseph Daly, a Marine Corps veteran, who emceed the event. “The middle of the semicircle, above the nine columns that symbolize our unity as a country, is embossed with the words ‘Lest We Forget.’ These three words represent our obligation as citizens to never forget the sacrifices of all who serve in our armed forces, especially those who have made the ultimate sacrifice. These words also serve as the mission statement for the DCVMA Board of Directors, reminding us of our sacred duty to remember and honor all who serve.”

In addition to awarding the 2022 Freedom Medals, the association and county council recognized the Juneteenth Artistic Collaborative Experience of Delaware County with the Dedication to Education Award. The award was accepted, on behalf of JACE, by Army Veteran Gerald Blye.

JACE is a committee that brings forth the history of their ancestors celebrating Black history in America and memorializing the role Black soldiers played in the armed forces, specifically by celebrating Juneteenth. Now a federal holiday, the first Juneteenth celebration in Delaware County was held at the veterans memorial.

Other speakers at the event included association board member and previous Freedom Medal awardee, Air Force Veteran Ralph Galati, who explained the significance of the POW-MIA Remembrance Table that was set up in the front of the ballroom. Galati said that since World War I, there are still 81,000 missing members of the armed forces. He urged those in attendance “to never, ever forget them” and asked for a moment of silence.

Others who were featured or participated in the program at the dinner included Sue Serio, who gave opening remarks; the national anthem led by Yvette and Christopher Pecoraro; the blessing said by Chaplain Justin Cohen; “Proud to be an American” sang by Carolyn Hilton-Finney; the posting and retiring of colors by Vietnam Veterans of America, American Legion Post 22, the Delaware County Sheriff’s Department, and the Villanova, Widener and West Chester universities combined ROTC.

Jasper Rose, a senior at Strath Haven High School, received a thunderous applause after talking at the podium about the reasons why he is applying to the United States Naval Academy to pursue a career in the military. He shared that he hopes someday to be a fighter pilot.

State Sen. Tim Kearney and Delaware County Councilman Kevin Madden awarded citations of honor on stage to the honorees after they received their medals. Madden said Delaware County is home to 35,000 veterans.

“Only 9% of young people are interested in entering the service and that’s why events like these, with all of these outstanding role models, are so important,” Madden said. “Thank you to all veterans for your sacrifices and valor.”

Veterans association board member Nicole de Botton Robinson also spoke at the event, giving regrets that her parents, Claude and Joyce de Botton, tested positive for COVID-19 and could not be there in person. The de Bottons were instrumental in the construction of the county memorial. Claude de Botton was a major benefactor, as well as the land donor, and his family have been avid supporters every step along the way.

Robinson had a camera set up to capture the entire event, so that her parents could watch it live, via Zoom, in their home.

Proceeds from Thursday’s event benefited the Delaware County Veterans Memorial Endowment Fund, helping to keep the memorial alive as it continues to grow in tandem with American history.

“Tonight, we give pause to offer our thanks to all veterans, their families and patriots,” Daly remarked to all in attendance. “Without your loyalty, support and continued generosity, this magnificent Memorial could not be maintained or exist. Your patriotism is uplifting, humbling, and deeply appreciated.”

The county memorial in Newtown Square, is an open-air living legacy to the military history and active service members of our country. Open daily, year-round, and free to the public, visitors are welcome to learn, honor and reflect on the American wars and conflicts and the courageous, honorable veterans who served in them.

No comments to show.